This past summer of 2017, Brooklyn’s The Sofas released their first single “Hum,” which immediately resonated with oddball indie rock lovers and fans of those fuzzadelic records from the ’90s bands like Flaming Lips and Mercury Rev were putting out early in their career. The band is about to release their debut full length “Chop Water” on Jurassic Pop Records; after the fun of “Hum,” our attention and curiosity are guaranteed.

Two of the band’s members, William Thomas (vox/guitar) and Myles Peterson (bass) recently gave us some insight as to what gear goes into making their distinctive sound.

Tell us about your first time with… a guitar pedal. How old were you and what stompbox was that?

Pretty sure my first pedal was a [EHX] Russian Big Muff. I remember saving up for weeks when I was in high school for it, and when I got it I had even less of an idea of what to do then than I do now so I just made a ton of fuzzy noise in my room, probably driving my mom insane. I’m actually considering giving a Big Muff another try though–maybe I can harness its power better now.

Was there a specific pedal (or two) that kind of changed your life?

I don’t know if a pedal has changed my life, but one that really impacted the way I play is my [Fulltone] OCD pedal. Especially being a broke NYC band, when we play out I’m typically at the mercy of whatever the venue has for a house amp, but no matter how shit the amp is I’m playing through, the OCD makes it sound like it’s a crisp vintage Marshall.

Right now I have a Diamond J-Drive MK3, Fulltone OCD, Pro Co Rat, Electro Harmonix Memory Boy Analog Delay, and a Boss Tuner. I’m still searching for the perfect blend of fuzz and distortion, so most of the pedals sit in that category. Our songs rely on building upon layers and layers of fuzz and noise, and these three distortion pedals do that nicely. I still don’t know how to use the Memory Boy. Any tips?

Diamond J-Drive MK3 – “I was surprised to see [Pavement’s Stephen Malkmus] only using three pedals, one of them being this Diamond J-Drive MK3. But he still managed to get so many distinct and interesting sounds out it that I was sold.”

What’s your favorite pedal on your board right now?

My go-to pedal for a while has been the Diamond J-Drive MK3. I was using a Fuzz Factory a few years back and wasn’t totally happy with it–I think it’s a bit too unruly for a main distortion pedal. But in like 2014 I saw Stephen Malkmus and the Jinks. I got to the venue super early, grabbed a spot right in front of him at the foot of the stage. I was surprised to see him only using three pedals, one of them being this Diamond J-Drive MK3. But he still managed to get so many distinct and interesting sounds out it that I was sold.

“…it turns out the real trick to getting those great Malkmus tones is being fucking Stephen Malkmus.”

So after the show I sold most of my pedals and went for a more minimalist board that included that J-Drive. It’s such a diverse pedal, I use it on every song, but the minimalist aspect of my board might not last much longer since it turns out the real trick to getting those great Malkmus tones is being fucking Stephen Malkmus.

Are there any stompboxes you are itching to buy?

I really don’t have room on my board to add anything, so it would have to be a buy one dump one situation, but I am really itching to try some Death By Audio stuff–definitely eyeing a Fuzz War at the moment.

Tell us about your first time with… a guitar pedal. How old were you and what stompbox was that?

I was 16 and the special pedal was an Electro Harmonix Envelope Filter. 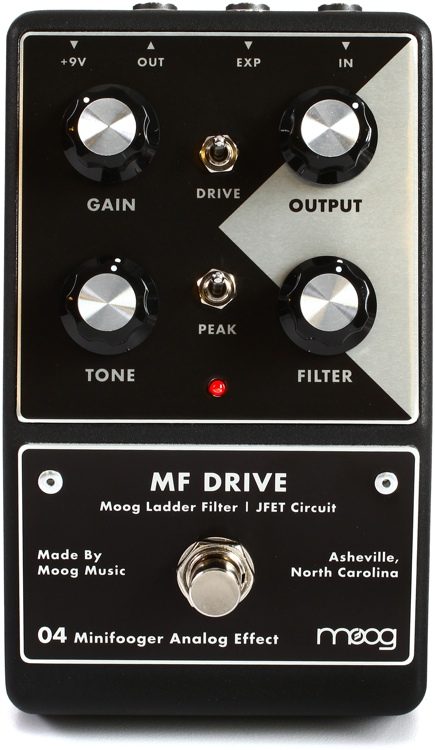 My pedal board consists of a Minifooger OverDrive, a Boss CEB-3 Chorus, and a Boss Bass Synth SYB-3. I like combining the Minifooger and CEB-3 when I can and the Synth which kinda produces an ocean texture to the fuzz

What’s your favorite pedal on your board right now?

I really love the Minifooger Overdrive pedal, it has a really big range and sounds awesome

Are there any stompboxes you are itching to buy?

Right now I’d really like to buy the Afterneath pedal by Earthquaker if you’re feeling generous.