The Filmosound Specialist Guitar Amp from At Mars Amps 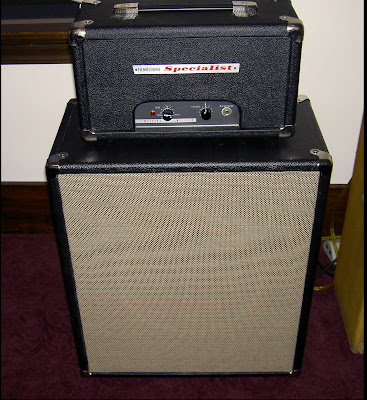 A couple months ago I mentioned a new amp maker, At Mars Amplification.  ( http://atmarsamps.com)

At Mars is a boutique guitar amp maker out of Minnesota.  Their flagship product is the “Filmosound” amp.  “Filmosound” was the branding on the audio amplifiers from vintage Bell & Howell film projectors.  At Mars takes the chassis from these units and builds a point to point circuit from scratch.  Point to point means no circuit boards, which means a cleaner signal path.

The most common model of Filmosound is “The Specialist”.  The amp is loosely based on the circuit in the original Fender Deluxe Amps (the tweed deluxe 5E3).  It’s a 15 watt head, with one volume and one tone knob.  That’s one major difference from the original tweeds, which had a normal and a bright channel.  I usually translated those two channels as single coil (normal) and humbucker (bright).

I got my hands on one during a trip to Minneapolis for a gig.  I got to play the amp on stage, and then brought it home to New York to test in the studio.  You’ve heard people say “this amp packs a lot of punch into a small package” a million times.  But seriously, I put this little guy on top of a Marshall 4×12 cabinet, and played in a 500 person venue (without adding anything to the monitors) and it rocked!  Then, I brought it home on the plane, and was able to carry it on!  It fit in the overhead bin more comfortably than anyone else’s baggage!!

I played a nice custom shop Strat for the live show, and I’ve never heard single coils sound so good.  The signature “bite” was there, but with a meaty, low-mid punch rarely heard from a stock Fender.  The amp displays an amazing sensitivity to picking and strumming dynamics, typical of “Class A” type amps.  The volume increases quickly from 0 to 3 on the dial, and from there you are gradually adding more gain (overdrive) than volume.  When you hit 8 to 10, something really cool happens.  The volume actually decreases a bit, as you get this highly compressed, spongy, saturated distortion.  Think Neil Young “Hey Hey, My My” or countless other Crazy Horse recordings.

If you’re looking for a loud, clean tone on stage you might want to stick with your Fender Twin.  But the beauty of this little guy is the way you’re able to get to the “sweet spot” of tube distortion at a reasonable volume.  Compare this to a Marshall or a Mesa Boogie where you’re hard pressed to get the master volume past 1.5 in most situations.  You’re not “pushing” the amp hard enough to put any strain on the power tubes and hear the amplifier’s optimal operating range.

This is what makes the specialist sing in the studio.  I put the volume at high noon, where a light touch gave me a bitey clean tone, and a hard strum started a growl!  I ran it through a 4×10” cabinet where it was extremely “full range” frequency wise, and through a single 12” Celestian it had amazing clarity and focus, that just cut through a mix with almost no EQ.

To understand what’s going on inside the amp, I’ll quote the At Mars website:  “This amp is driven by a pair of 6V6 power tubes with the power supply rectified by the 5Y3 rectifier tube. The front end normally uses a 12AT7 and 12AX7 for the preamp and driver/phase inverter. However both of these tubes can be substituted with any tube from the 12AU7 family to provide a variety of gain structures based on your preferences.”

That sounded like an invitation, so I had to start swapping tubes.  I was wondering if I could get a bit more clean headroom before the amp started getting chunky, especially when using it live with any of my Gibsons.  I swapped the 12AT7 preamp tube for the less powerful 12AU7, and stepped the phase inverter down from 12AX7 to 12AT7.  For me that was the sweet spot.  The volume increased more gradually from 0 to 3, and I was able to get up to 4 or 5 before the amp started breaking up.  There was definitely no loss of volume or power with this change.  Going more extreme, putting two 12AX7s together turned the specialist into a searing hot rod, and two 12AU7s made a very clean and clear latter day Fender tone. This may seem more like a comparison of preamp tubes here, but the point is that the Specialist is such a great implementation of a very simple design, that you’re really able to make some significant changes to the tone with a single tube swap.  I’ve tried similar experiments on Mesa Boogie and Ampeg amps at my studio with intangible results, due to the six preamp tubes in these amps!

At Mars amps are currently made in very small batches and customized to your specs without too much extra turnaround time or an exorbitant cost increase.  (These amps are amazingly affordable for what you get, especially compared to the originals they duplicate, or other boutique amps)  That being said, I might request one of their optional gain cut or half power switches.  The gain cut would be nice if you’re not as nerdy or adventurous as me about swapping tubes for different gigs or sessions.  The half power will let you get the tone you want without overpowering your rehearsal mates with an amp thats about the size of a lunchbox!  Pair it with one of their matched cabinets in basically any tolex finish you can find, and you’ll have a great little rig that looks as cool as it sounds.  Four Stars for AtMars!