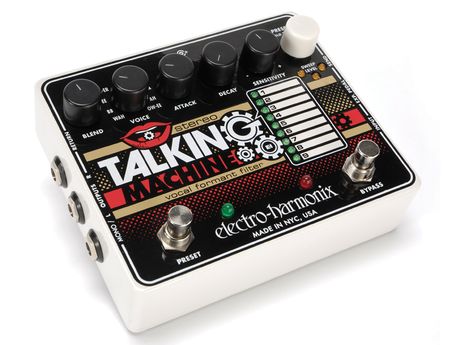 The Electro Harmonix Talking Machine (street $220) is, at its heart, an envelope filter. Like many of EHX’s new offerings, though, it pushes the boundaries of everything before it, adding tremendous versatility—and not a little complexity—to the traditional auto wah.

The Talking Machine makes seven vowel sounds plus EHX’s signature Bass Balls effect and an auto wah. The speed of those sounds can be adjusted forward and in reverse, effectively doubling your filters. But you aren’t out of options yet… Hold down the present footswitch and blend, attack and decay knobs become volume, tone and gain of a Big Muff, enabling you to create filthy funk riffs you can switch to and from using the present button.

The pedal comes loaded with nine preset sounds, but you can overwrite these by holding down the white preset button.Most of the presets maximize the pedal’s broad capabilities, including the aforementioned filthy funk; you’ll probably want to hold onto at least half of them.

Additional features include optional stereo out, plus a send/return circuit, and you can use an expression pedal to control the sweep as you would with a traditional wah. All this fits in a compact 6”x4.7” metal box. The pedal doesn’t take batteries, but it includes an AC adapter.

Because of the nature of the beast (filters are complex effects) it takes a commitment of time to get the most out of the Talking Machine, but the enormous functionality combined with a solid build make this pedal a superb tool for sonic pioneers. – Howard Stock