Avant-pop sextet, Arthur Moon, recently released their sonorously boisterous debut EP, Our Head, and since then, the record’s delicate, electro-tinged 5 tracks have been defiantly stuck in our heads. Recently, three of the band’s members, Lora-Faye Åshuvud, Nick Lerman, and Marty Fowler, chatted with us about their creative process, and bit of the magic happening behind their gear that gives them such a distinct sound.

What was your initial motivation to form a band, when you initially started playing?
I wanted more sound, more ideas, more perspectives, more skill, and most importantly more mistakes.

I like making music about the pleasure we find in disorientation.

Lora: your past is in roots-ier genres, what prompted you to explore more adventurous sonic soundscapes?
I think I’ll always be influenced by the way some American folk music can be so bizarre/illogical yet so emotionally accessible at the same time. Right now, the exploration of electronic sounds in their varying forms really just feels like an extension of that practice.

Arthur Moon’s debut EP Our Head is very original in its “intricacy”. Is there a rational conceptualization behind your sound (i.e. are you purposefully trying to recreate a sonic idea?) or are you just following your musical instincts?
I like making music about the pleasure we find in disorientation. Sometimes that’s just a lyrical exploration, sometimes it’s in the composition itself or its arrangement, sometimes it’s the performance, and sometimes it’s in the production. “Bold Affair,” as a more straightforward example, does this thing where it tricks you into thinking you’re in a big old swing-y 4, but as the song unfolds, you realize that it’s been in 5 the whole time. That came from the great production work of Andrew Sheron, and also our bassist Marty Fowler, who came up with a really brilliant way of creating the illusion of 4/4 in the arrangement at the beginning of the song. The EP had a few different producers, the first being Andrew Sheron, who worked on “Bold Affair“, “Boxing“, and “Wind Up”. Andrew’s way of thinking about production and sound, in general, had a huge influence on me in the making of this EP, and in my evolution as a musician. Much of the “intricacy” you’re noticing comes from hours spent in Andrew’s studio, really examining the emotional/conceptual spaces we were hoping to create and the kinds of textures we could use to do that. And I also think there’s a level of intricacy that comes from the arrangement process with the band—these people are exacting, idiosyncratic weirdos who really love to make extra work for themselves on stage.

What’s the songwriting/arranging process in the band? To what extent is each band member’s role defined?

I think writing in many different formats with different rituals can keep the music sounding interesting and exciting.

It varies. Sometimes I come in with a fully formed “song” and then the band takes it apart and puts it back together again (“Wind Up” was done that way). Sometimes Marty and I send Logic files back and forth until we come up with a cool idea to bring to the band (that’s how we did “Room”). I think writing in many different formats with different rituals can keep the music sounding interesting and exciting. In terms of band member roles, I guess there’s some definition in that folks have their instruments that they play. But most of us are multi-instrumentalists and we all have a keen interest in arrangement and composition and engineering, so any rehearsal where we’re working on new material always feels like a group effort, not just an execution of some overarching vision coming solely from me.

Are there any instruments, pieces of equipment or musical toys that defined the EP or were particularly inspiring during its creation?

Andrew was working on his own record made entirely of binaural audio (The Late Great Bloomer, by Sheron) during the period when we were tracking the EP, so there was definitely some interest in the whole 3D audio thing while we were up at ArtFarm (the studio where we recorded “Boxing” and “Bold Affair“). Some of the crickets that you might notice singing here and there on the record come from a late-night walk we took with a binaural mic.

Could you send us a picture of your board with the list of the stompboxes on it and a brief description of why you like them and how you use them?

The AMT volume pedal – the smallest volume pedal I’ve seen that works well. I use it ALL the time.
Zoom G2.1nu – I bought this for the serviceable tremolo. However, I have been customizing and programming patches, both generally and for Arthur Moon songs since. Its versatility has kept it on my pedal board for years.
Ditto loop pedal – I recently switched to this loop pedal which has very nice reverse and 1/2 speed settings. I use it for textural things and experimenting with looping samples.

You’ll notice my board is completely out of a logical order. But I love the way the Little Big Muff sounds coming, unconventionally, after the delay and reverb. Like a giant, scary mush. It takes up space when I need it to. I also love the way the Earthquaker Ghost Echo Reverb sounds coming before the MXR Carbon Copy Analog Delay. It confuses and pleases me. Oh and also the way the Big Muff sounds coming into the Boss Chorus without any reverb. It’s like sandpaper on a sunburn and it’s featured heavily on one of our upcoming releases.

We hear lots of synths in your music, what are they, what do you love about them? 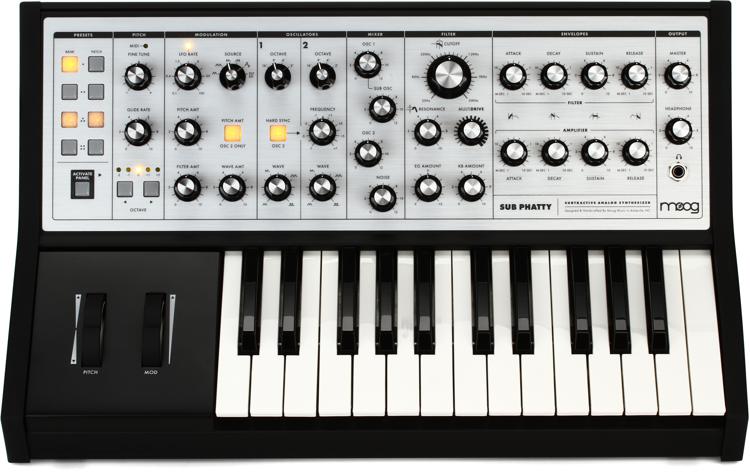 Marty (our bassist and occasional producer): I love hearing a pure and resonant tone, and the way something so perfectly in tune feels to the body and the brain, but then mixing in enough detuning or bends or filter openings to imbue the synth’s pure waveforms with a touch of humanity. The Moog Sub Phatty is great for this, with its two oscillators plus a sub oscillator. It’s an incredibly pleasant and humanistic balance of “right” and “wrong.”

What other current emerging NYC bands do you feel like you have an affinity with?

We love the new project from our collaborator Rachel Brotman (she sang and played keys on the EP). It’s called Raia Was, and one of our vocalists, Aviva Jaye, also sings and plays in the band. We’ve found a real affinity with Iris Lune, who we toured with this winter and who I think we share some approaches to sound-making with. We also love Julia Easterlin’s new project, Hite. We’re sharing a bill with them at Baby’s All Right on July 30.